What a great idea! A think tank at the University of Wisconsin-Madison named for my mentor, Tommy G. Thompson, our longest-serving governor and, to my mind, the most consequential in the last 100 years.

Or “a fine idea,” as the Wisconsin State Journal puts it this morning.

“Critics warn that the center could push a conservative agenda,” the State Journal editorializes. “Instead, the center should foster a constructive dialog and greater understanding.”

Never mind that Republican legislators are miffed at the hostile environment for conservative speakers, students, and professors (few that there are) on campus. Enough to consider codifying into statute (the Campus Free Speech Act) what the UW’s “sifting and winnowing” plaque only promises.

Not to worry. Promoters are promising “no particular ideological angle.” If so, the TGT Center would be the first such institution at the university (outside of the hard sciences) not to have an agenda.

Madison’s UW campus is territory occupied by the Resistance, as are most major universities in America these days. Held hostage by queer studies and hip hop masters’ candidates wallowing in victimhood and grievance. Where students hoping for a passing grade in a course called “The Problem of Whiteness” had better brush up on their DeeRay McKesson.

Even at Catholic Notre Dame University. CNN was all over the 100 or so graduates who walked out of Vice President Mike Pence’s commencement address. His speech was newsworthy for another reason: it was one of only two graduation day speeches delivered by a conservative at any of the top 100 American universities, according to Accuracy In Media.

Money talks, so what are University of Wisconsin profs, administrators, and staff saying? The answer, according to 2016 election cycle campaign contributions, as compiled by the OpenSecrets.org, is DEMOCRATS! 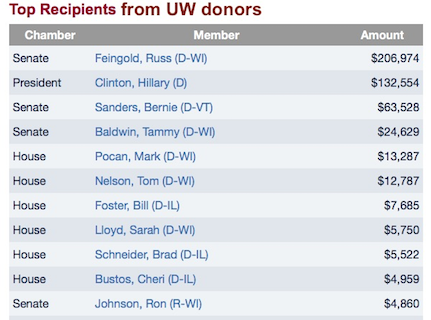 ‘It’s easier to find a Marxist than a Republican’

The hopes of the indentured servants here at the Manor were raised then cruelly dashed when my daily e-mail from New York Times columnist David Leonhardt said that — aside from race and religion — there was not enough diversity on our college campuses. Could it be that …?

At college graduations around the country this month, there will be many paeans to diversity. But leading American colleges still aren’t nearly as diverse as they imagine themselves to be. Yes, they are filled with students from every religion, race and region. And colleges can take pride in this diversity, given their long history of exclusion. Yet many campuses still practice one form of exclusion: They don’t enroll many talented students from the bottom half of the income distribution, despite the fact that thousands of such students are out there.

Fooled again! The lack diversity Leonhardt bemoans is not philosophical, ideological, or political. It’s income — part of the identity politics triad (the others being race and gender). NY Times columnist Nicholas Kristof, of all people, got it right a few months ago when he observed:

Universities are the bedrock of progressive values, but the one kind of diversity that universities disregard is ideological and religious. We’re fine with people who don’t look like us, as long as they think like us. … it’s easier to find a Marxist in some disciplines than a Republican. — “A confession of liberal intolerance.”