Returning to one small schoolroom in the country, 1955 (part #1)

When Blaska was younger,
so much younger than today.

We are in the midst (and we hope, not the beginning) of a history-making coronavirus pandemic that could well change America forever, in ways not yet apparent. Will distance learning become the new normal? America work from home? Sporting events in front of the cameras only? Has the simple handshake gone the way of the spittoon?

In my youth, we thought we would never see as much change as our grandparents, who were 18 years old when the Wrights took flight. Now I realize my generation has seen as much history as they. We admire the scenery of a chosen street in Prague using Google Earth and peered down from the moon. We have put a birth date on the universe’s origin and mapped out genomes, the building blocks of life. We had our own wars but different, against stateless terrorists.

Pardon, therefore, this Old Settler if he recounts a little history of his own. It is of the quotidian kind but so was The World of Yesterday, a Jewish kid growing up in pre-WW1 Vienna. (We’ll concede Stefan Zweig has greater literary merit.) But in many ways, so much remains the same.

Farm kids in a country school

A posting of a 1951 item on the Facebook social media site, “If You Grew Up in Sun Prairie” got us reminiscing. (That’s what senior citz do, isn’t it?) Coach Fran Sheehan posing with his champion high school basketball team, which pictured my father’s cousin Fran Blaska (in a Catholic farm family of 10, his father was 25 years younger than my dad’s father!) and good neighbor John Krebs, whose funeral I attended last year.

The Krebs “home farm” surrounded our little country school, Oak Lawn, on County Road VV one-quarter mile north of WI Highway 19. John’s father, Julius Krebs, home delivered milk. (Mother also had groceries and, separately, bread delivered. Traveling salesmen sold us encyclopedias and condiments.) It was one of the chores of kids at Oak Lawn to walk next door to his dairy for the day’s supply of milk and, on special occasions, orange Creamsickles!

The one-room school was a one mile jig and a jog from our house. In early September 1955, mother pointed across the Schuster’s field to a small building on the horizon announcing that I would walk over there the next morning for my first day of school. Mother could not drive.

Thought nothing of walking, even in snowstorms. (“And we LIKED it that way!) In one particularly nasty storm, an old man named O.J. Long pulled alongside in his sedan and offered a ride. Repeated mother’s  injunction against rides from strangers. Mother was obsessed with the notion that gypsies would run off with us six kids. Mr. Long pointed to a nearby house lying between my home and the destination. “But I live right over there.” Accepted the ride and was not exposed to the music of Django Reinhardt until decades later.

That was 65 years ago this fall (we’ll pause whilst you do the math). General Eisenhower was in his first term as President. Although I did not realize at the time, the Oak Lawn school building that year was 60 years old  — built in 1895 when my grandfather J.M. Blaska attended at age 10 (pictured above).

In the 1955-56 school year, all 24 of us pupils (as they were called then) were country kids; most from farms that stretched back three generations — descended largely from speakers of German, many from the Sudetenland of Bohemia like mine, who replaced the original Yankee settlers — but also some tenants living in the spare houses.

One of the latter arrived in my second year of schooling, an exotic black-haired creature from Texas named Nancy Tallent, subject of much speculation (but, from what I can remember, complete acceptance). It was said her father was an (American) Indian! Boys played cowboys and Indians in those days. We found sticks shaped like revolvers until Santa brought us Hopalong Cassidy-branded armaments loaded with a roll of caps for sound effects and a whiff of cordite. The term “politically correct” lay off in the Orwellian future.

“I know y’all studyin’ up to be a farmer,” Nancy announced one fine day. “But do you have to wear overalls every day?” Back home, the smitten boy asked mother why he had to wear overalls EVERY DAY! Poor Helen! 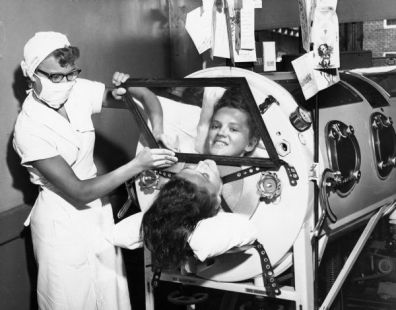 Health scourge of the 1950s

That very first day in school in September 1955 Mrs. Taylor announced that a girl (whose name I did not recognize and never committed to memory) would not be in school this year. She had contracted polio — the same disease that had crippled FDR.

At some point later that year or the next, we lined up in the new elementary school constructed in 1955 in the village of Sun Prairie (just under 4,000 compared to today’s population of almost 34,000; it did not become a city until 1958) for Jonas Salk’s polio vaccine, which he had announced to the world in April 1955.

The wailing up ahead in line only confirmed the foreboding of the dreaded needle. But we didn’t want to wind up like those kids in iron lungs we saw on the TV telethons. Just three years earlier, the 1952 polio epidemic killed 3,145 and left 21,269  with some form of paralysis, including (in a very slight case) my distant cousin and neighbor Jim Skalitzky.

The polio epidemics not only altered the lives of those who survived them, but also brought profound cultural changes, says the Wikipedia entry.

Madison WI
View all posts by David Blaska →
This entry was posted in Tales from the front lines. Bookmark the permalink.

4 Responses to Returning to one small schoolroom in the country, 1955 (part #1)