Celebrating thick plumes of black smoke at the Thresheree

The indentured servants were given the afternoon off Sunday (09-01-19) for a trip back to the past. We piled into the FIAT 500C as if it were a Zor Shrine clown car and headed south to Edgerton for the Rock River Thresheree.

The Policy Werkes intelligence-gathering systems have long known about this annual celebration of everything that belches smoke — in a back-of-mind sort of way. But the old farm kids among us were knocked out beyond all expectations by the actual experience. A good road trip being as much about the journey, we happened upon historic (and unincorporated) Cooksville on Highways 138 and 59, just over the county line in Rock County. A Massachusetts speculator named Daniel Webster once owned this part of the world and it was settled by fellow New Englanders who built their structures in the distinctive style of their homes back East, starting with Mr. John Cook, whose red brick abode has stood since 1842. (Cooksville News here.) 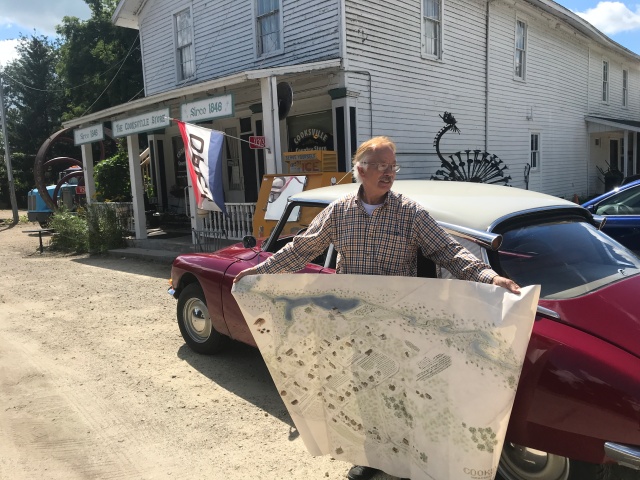 We delighted at Cooksville general store, Wisconsin’s oldest in continuous operation, since 1846 — two years before statehood. The friendly lady at the counter said indoor plumbing was added nine years ago. We ordered an ice cream cone.

Outside we encountered retired Madison business person Chris Beebe and his 1974 Citroen DS — some have called it the most beautiful car of all time. Chris used to operate Foreign Car Specialists on Regent Street. He said none of his nine Citroen Deux Chevaux — the VW Beetles of France — are for sale. That’s not counting the various MGs and Jaguars he collects. Mr. Beebe has reconstructed a map of Cooksville circa 1890 that is, itself, a work of art.

Just west of Cooksville on Highway 59 we encountered a tobacco harvest in full swing. Edgerton and Stoughton were the entrepôts of of Wisconsin tobacco, which is grown for chewing tobacco (loose leaf as opposed to snuff). The long, two-story, cream brick warehouses built 100+ years ago still stand. Much less of the leaf is grown today but the harvest has not changed since my youth 50+ years ago. We would say it took a strong back and a weak mind to grow tobacco and, indeed, it remains hand labor except for the tractors pulling the wagons.

Piles of wood and coal to feed them

Speaking of tractors … probably a thousand of them at the annual Labor Day weekend Rock River Thresheree, which runs through 5 p.m. today south of Edgerton at on E. Cox Road just east of U.S. Hwy 51. All of them old classics except for the modern models pulling wagons loaded with spectators around its 200 acres.

International Harvester Farmall (one of my favorite tractors) is holding its annual jamboree just inside the admission gate ($10 adults). The owner would not sell me his orange, rear-engine Allis Chalmers G., which we kids used to cultivate tobacco because you could see through the open frame in front to the plants below.

But the headliners of this show are the behemoth, iron-wheeled steam engines that once lumbered over Midwest and Plains acreage like smoke-belching Mastodons. Each one unique, many of them colorful.

They were locomotive train engines that rode off the rails, requiring expert operators to regulate fire and steam and pilot the beasts to their jobs. My grandpa J.M. Blaska bought his in 1908 and I wish I knew the make, very probably a Case made in Racine. Grandpa threshed oats, wheat and barley (the latter, destined for Pabst beer) grown on his farm and those of his neighbors up to the early 1950s, when he was one of the last to do so. Threshing required crews of hungry and thirsty men, for it was a dusty job. (The women folk prepared huge meals to feed them.) The grain was hauled to the threshing machine, powered by the steam engine, unlike today’s combines which go out into the fields. Strong men were required to bag the grain and pile them onto wagons. Another team removed the resultant straw to the barn.

The steamers paraded past the reviewing stand to knowledgeable commentary over the public address system. At one end of the 200 acres, plowing demonstrations. Over in this pen, kids can drive their first tractor under adult tutelage. Over there (“Over There!”) World Wars 1 and 2 encampments, black smith shops, a log cabin with domestic arts (including yarn spinning) a huge pile-driving contraption that looked like the oil well at Titusburg PA. A classic automobile show. An open-air train circled the property. Food stands aplenty but no beer tent. We’re guessing too many spectators and too many vehicles crawling over the property for insurance.

Those big old steam engines did not exactly turn or stop on a dime.