Release them from jail!

“They were murdered by a person they had tried to help.”
—  Robin Carre – Beth Potter obituary.

In fairness, Khari O. Sanford came to Madison as damaged goods. Writing from his jail cell to Judge Ellen Berz in September 2021, Sanford wrote he was the oldest of seven children to a single mother in Chicago and a father who spent the son’s first 10 years in prison.

“One of my greatest friends died in my arm at the age of seven years old as the result of a drive by shooting,” he wrote. “That was my first traumatic experience.”

Progressive Madison — its schools, families, city government, and legal system — tried to help Khari Sanford. Instead, it taught him he was a victim of America’s supposed systemic racism. 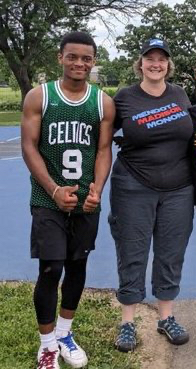 The voice of youth

The City had given young Sanford an internship at city hall the year before the murders. Sanford wrote from jail: “I worked in the Common Council department in this very building [where] I am now a “resident.” A deft reference to the term Sheriff Kalvin Barrett demands be used to describe inmates in his jail. Sanford described his duties in that letter to the judge:

My job was to summarize meetings. … I was always the only young person in every meeting so I wrote a proposal … to have youth at the table when change is being discussed. I became a voice for all youth. …

Mayor Satya Rhodes Conway (Progressive Dane) posed with intern Sanford in July 2019. (She tweeted it.) Like most city leaders, her first priority was to combat racism, which she saw embedded in the city’s DNA.

He can’t breathe, either?

The next year in Minneapolis, a black man named George Floyd died 05-25-20 under the knee of a white police officer. That weekend, the usual gang of social justice warriors, bored college kids, and criminal opportunists visited kristalnacht upon State Street, Madison.

Armed with a baseball bat and bellowing BLM slogans through a bullhorn, a black man named Devonere Johnson began shaking down downtown restaurant owners in the name of racial justice.

“Venmo me the money,” he demanded. “You don’t want 600 people to come in and destroy your business and burn it down,” Johnson told restaurateurs. “The cops are on our side,” Johnson continued. “You notice that when you call them, nothing happens to us.”

Until June 23, 2020, when police arrested him outside one such restaurant on Capitol Square on charges originated not by local elected law enforcement, but by the Trump-appointed federal prosecutor. For the bystanders duly recording his resistance, the resourceful Johnson thought to cry out “I can’t breathe.”

That night, Diversity, Equity, and Inclusion soldiers broke windows in the State Capitol. Pulled down a statue of an empowered female figure entitled “Forward,” the state’s motto. On the other side of the Capitol, they toppled the statue of an abolitionist who died fighting slavery in the Civil War, dragged it through the streets, and dumped it into Lake Monona. A state legislator who recorded the forbidden scene — a gay Democrat — was beaten.

Where were the police? Ordered to stand down! Fearful of the wrong confrontation, they couldn’t even defend police headquarters in the city-county building. It was fire-bombed.

The very next day Mayor Rhodes Conway demanded that the Johnson be returned to the streets of Madison.

“I have asked for Devonere Johnson’s … initial appearance before a judge to be expedited so he can be released on bail. I recognize that we need better options to de-escalate situations and offer restorative justice in our community.”— Posted on 06-24-20 on the mayor’s official website.

“They shouldn’t have even given him a ticket,” Alderman Tag Evers chided.

At his sentencing hearing months later, Devonere Johnson promised the magistrate he’s back on medication and dealing with his feelings of anxiety and “implicit bias” against [wait for it] white people.

Only a few blocks away from the smash and burning the same night a black woman put her claim on victimhood. Althea Bernstein claimed four “classic Wisconsin frat boys” doused her with lighter fluid and set her ablaze as her vehicle stopped at a State Street intersection. ABC’s Good Morning America reported her story. Princess Meghan telephoned condolences. Althea was handed the bullhorn at Madison’s serial anti-racism protests.

What the victim wannabe did not know is that downtown Madison is on candid camera 24/7. No frat boys, no lighter fluid, no stop lights on her thoroughfare, car windows rolled up. When there isn’t enough racism to go around, you have to invent your own. Unlike Jussie Smollett in Chicago, Madison’s racial hoaxster was never prosecuted.

Although some of these events occurred after the Carre-Potter murders, they grew out of the soil of Madison’s identity politics. The constant grievance-mongering could not help but feed Khari Sanford’s sense of entitlement.

NEXT: A prosecution that should not have been deferred.

12 Responses to Release them from jail!