Ideology tramples inquiry at the UW

History at the University of Wisconsin
has never been more political!

With the help of Ol’ Sparky, our Eisenhower-era mainframe computer, the gray labcoats at the Werkes are developing a theory. It’s what they do.

The theory is that the backlash against Joe Biden’s absolution of student debt is driven less by economics or even class resentment. “Tradespeople” aren’t the only ones resentful, nor even college graduates who paid off their debt. What’s hacking us off is the Soviet-style totalitarianism of today’s college campus. Academia’s hectoring intolerance of dissent. Dissidents are shunned, harassed by thuggish students, disinvited, canceled and thrown down an Orwellian memory hole. Maybe college should be unaffordable!

The last thrilling episode of The Werkes explored the unconscionable un-personing of one of the greatest artists of the 20th Century, Wisconsin’s own Fredric March. More absurdly, a 42-ton glacial erratic boulder known as the Chamberlin Rock was banished from campus. A big stone! Trucked away from its 10,000-year resting place because a small clatch of students, inflamed by instructed grievance, feigned injury! (!!!) UW-Madison, after all, helped birth critical race theory. 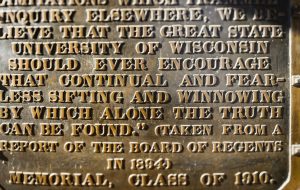 ‘Sifting and winnowing’ in the search for truth at the University of Wisconsin has become more fearful than in Joe McCarthy’s time.

So we pose this thought exercise: Let’s say for one year back in the 1920s, a student from Racine named Ernest Frederick McIntyre Bickel really did admire the Ku Klux Klan and — conscious of its evils — founded a student social club in its name. (Although the actual evidence is to the contrary.) Subsequently, he and his fellow students came to Jesus and scrapped that horrible name and renounced the horror it represents. In the next 50+ years amid an honored acting career, as Fredric March, this UW graduate went out of his way to work for civil rights. Is nothing to be learned from redemption? No second acts in American lives? No room for the prodigal son?

Can we not expect more — as our progressive … acquaintances like to say — NUANCE in the lives of our saints? Even Peter doubted.

Not in today’s university! A professor at UW-Madison dared question his profession’s obsession with distorting history through the lens of today’s identity politics. Prof. James H. Sweet is president of the American Historical Association. Writing  “Is History History?” in the association’s magazine, he warned that “bad history yields bad politics.”

Too many historians, Sweet argued, use history “as an evidentiary grab bag … to articulate their [own] political positions.” He cited The NY Times’ 1619 Project as an example. His critique “immediately raised howls of protest on Twitter from left-wing academics.,” NY Times columnist Bret Stephens reports.

Within two days, Sweet produced a groveling apology, in which he indicted himself for a “ham-fisted attempt at provocation” that “alienated some of my black colleagues and friends” and for which he was “deeply sorry.”

Stephens gets The Bottom Line: “Anyone looking for further confirmation that modern academia has become a fundamentally ideological and coercive exercise masquerading as a scholarly and collegial one need have looked no further.”

Does a college education produce stupidity?

Madison WI
View all posts by David Blaska →
This entry was posted in cancel culture, Uncategorized. Bookmark the permalink.

23 Responses to Ideology tramples inquiry at the UW