Appreciating the King the Founders hated

Thought of himself as ‘the Patriot King’

Andrew Roberts wrote what is probably the best one-volume bio of Winston Churchill; walking with destiny. His latest book rehabilitates King George III as a wise, humane and even enlightened constitutional — but hands on! — monarch. A patron of the arts, well read, abstemious, a fitness buff, and — unusual for the time — faithful to his wife.

The Last King of America; the Misunderstood Reign of George III tells the story of the wrongly vilified (in America) king.

Florid of face and bug-eyed, loved by his people (most of the time), George III reigned for 59 years, a record exceeded by his grand-daughter Victoria and gr-gr-gr-great grand daughter Elizabeth II. And ruled as a constitutional monarch, except during four (maybe five) periods of debilitating insanity — some of which confined him to a straitjacket. In one episode, he spoke non-stop for 25 hours. They were caused, not by porphyria but by manic depression, Roberts argues. 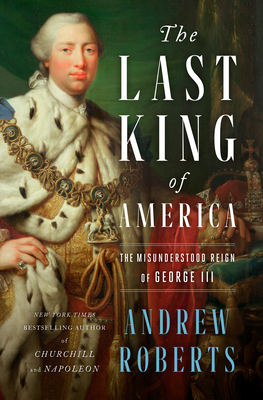 This is a king who fought the American Revolution, guided Britain past the French guillotine, and battled Napoleon — several times girding for invasion of the home islands. Who purchased Buckingham House (later Palace) but was parsimonious, unlike his debt-ridden son— an alcoholic, priapic gambler.

George 3 was called, approvingly, “Farmer George” for his promotion of scientific agriculture. When told that victorious  General Washington would return to his farm, the King exclaimed that “If he does that, he will be the greatest man in the world.”

The author (somewhat laboriously) refutes as wartime propaganda all but two of the 28 “crimes” alleged against the king by the Declaration of Independence. “In breath-taking gall, Jefferson even blamed the slave trade on George.” Roberts quotes John Adams to later say “I never believed George to be a tyrant in disposition or nature.”

As for the Stamp Act, Britain had, after all, defended colonial adventurers like Dan’l Boone from France in the Seven Years’ War and thought the beneficiaries should share the cost. At one point during the subsequent war for independence, George offered the revolutionaries local self-government (including the power of taxation) and seats in Parliament, asking only control over foreign policy. By then, it was too late. America was hellbent on independence.

Magnanimous with an eye to history

Accepting defeat in 1783, George told Parliament, “We shall reap more advantages from their trade as friends than ever we could derive from them as colonies.” Vladimir Putin should read this book. George III did not thirst for blood or revenge. Roberts writes:

Benjamin Franklin was credited with making the genuinely witty remark that ‘We must all hang together or, most assuredly we shall all hang separately.” In fact, the British never had any intention of behaving in that way … Franklin and the other signatories were in little or no danger of being hanged in the event of defeat unless they had fallen into the hands of Loyalist partisans.

More than Mike Pence can say!

In announcing Britain’s capitulation, George hoped that “Religion, language, interest, affections may, and I hope will, yet prove a bond of permanent union between the two countries.”

How are YOU observing Independence Day?

14 Responses to Appreciating the King the Founders hated