Why is this ‘valid test’ beeping?

The Werkes has dibs on a fool-proof scam that will defund social justice warriors of their bail money.

The potential market is bigger than ice cream at a Biden rally. In Madison WI alone buyers will come from Mayor Satya’s city government, Ali Muldrow’s school system, Tony Evers’ state government, and most of its pizza palaces.

Our idea will get all five venture capitalists on the Shark Tank reaching for their wallets! Even Mr. Wonderful!

Devise a test, a device, a contraption, a thing-a-majig that purports to ferret out white privilege, unconscious bias, and/or institutional racism. Charge extra for a hetero-normative patriarchal sniff-finder. Get someone like A.O.C. or Joy Behar to endorse it. 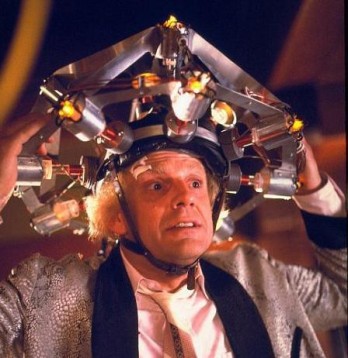 We’re working off Progressive Brad’s formulation of “a valid test” [that] would test every man, woman, and child in America to “rigorously quantify the extent of racism in our society today by disclosing both their explicit and implicit biases.” Something “scientific” that could override the Constitution.

A startup already claims its software can spot racial bias within companies. A software startup called UnBiasIt had developed technology to detect keywords for racial, gender, or age bias in e-mails, texts, and phone calls. Already in use at a credit union in Columbus OH. (More here.)

Put on your thinking caps, people!

Software word recognition is but one technology. The Werkes entertains bodily invasive tests. Why stop with a cotton swab up the nose? Can we be even more creative than blaming a 42-ton rock for racism? Why not attach a Cherenkov radiation detector to the air filtration system? Make it beep and light up like the set of a 1970s daytime game show whenever an unfavored employee walks through the employee entrance. Give the poor moke a permanent tattoo before he gets tased and tackled.

Surely, the MacArthur genius grant has dollars for social justice breakthroughs like this. Got to be buried in Nancy Pelosi’s $3.5 trillion reconciliation bill.

Some ideas may be too stupid, but no idea is too politically correct! Train german shepherd dogs to sniff out bias? Hire an idiot savant who can count cards AND spot privilege? A little squirt of truth serum in the next Fauci Ouchi? Forget ColoGuard, Exact Sciences. Think Politically CorrectoGuard!