Now I think of my life as vintage wine from fine old kegs.

A total of 195 friends posted birthday wishes on my social media timeline. I don’t have that many friends in the real world. (Seems like I am always culling the herd.) These are Facebook friends — nine-tenths of whom, it seems, believe that Donald Trump will return to the White House on August 13. But we’re thankful just the same for all the well wishes.

We did get a few old-fashioned birthday cards, which are extra special. And messages from my four surviving siblings, much appreciated. Never put that much stock in birthdays — my own or anyone else’s. Figure it’s a scheme by the Hallmark Corporation to sell cards. It is a somewhat arbitrary day. Life goes on, et cetera. 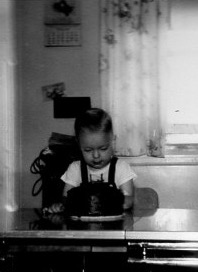 Two candles, not 16; That’s the cloth-covered cord of a (party line) telephone behind me.

But your irascible host observed the 72nd anniversary of his nativity as the first-born of six at 5:23 a.m. on 14 July 1949. Harry Truman was President, the Braves were still in Boston, Fauerbach was brewing beer in Madison, Oscar Rennebohm was governor. If you wanted to watch Uncle Miltie you had to go to your favorite tavern because few homes had television. We didn’t until (I think) 1953. Remember being afraid that America would be zapped when the Soviets launched Sputnik in 1959. November 22 still hurts. The Beatles on Ed Sullivan. Vietnam riots on campus. Civil rights marches. Clean for Gene.

First year of school was 1955 at Oak Lawn Country school; total 1 through 8 enrollment: 17. First day of school, Mrs. Taylor announced that a classmate wouldn’t be with us; she had contracted polio over the summer. Two outhouses in back. Pumped water for the ceramic bubbler inside. Chocolate goiter pills. Traveling music teacher.

I am the same age as grandfather J.M. Blaska when he died (1885-1957), the first deceased person I had ever seen, which may be why this particular birthday is shaking these old timbers a bit. Time is relative — we’re halfway through July before we even noticed! During the annual “wellness visit,” my personal physician inquires whether his patient is being mistreated. It’s a legal requirement to ferret out elder abuse. Elder abuse! I’m a protected category!

And we liked it that way!

The Lovely Lisa and I are enjoying the Kominsky Method which celebrates its two (ahem) mature heroes, Michael Douglas and Alan Arkin. (Go with the flow, if you’ve seen it.) We are preparing a living will; instructing survivors to pull any plugs, if need be. Falling asleep at night begins with the recollection of some stupid thing I did years ago. (Seems to be no limit to those.) But health is good, considering arteriosclerosis and a spot of the big C, both caught and treated a dozen years ago. Knock on wood and pass the fresh fruit.

Toured two up-to-date farms of our annual motorcycle week hosts last week — one outside Watertown and another in NW Illinois. Scientific feed management; breeding for easy calving. Herds numbered in four figures, not the 48 in grandpa’s barn — large for its time. A long way from the farms of silos, stanchions, and open tractor platforms of my youth. The Allis Chalmers model G project was a product of that nostalgia.

What made the Head Groundskeeper post this uncharacteristically personal stuff is a blogge from Greg Humphrey at Caffeinated Politics.

While politics has always been frothy and energized it does not require those we disagree with to be our enemies.  There should be — must be — civility and friendship among those who view the political world differently.  I consider Blaska a gentleman and wish him a most Happy Birthday.

Owe it all to Jerome and Helen Blaska, my parents. Turns out it’s also Greg’s birthday so back atcha, you big liberal.

Blaska’s Bottom Line: Guess it’s like the Winston cigarettes we used to smoke. When you’re down to your last few they become more precious.

How are YOU today?