They are coming for us

Nothing succeeds like excess. In two years, if Joe Biden is inaugurated, we’ll all be speaking Chinese. The hammer and sickle will replace the State of Liberty. Abortion will be mandatory. Some of our … friends would rather believe Lin Wood and their cult leader than Bill Barr, Mike Pence, every court in the land, Republican leaders in Congress, and the Joint Chiefs.

Must Defeat Biden by any means necessary. Social media poster Bill Elmhorst: “Biden going to put us under (his) martial law. He intends to disarm the American people by force.”

“This is why Trump supporters need to either kick the RINOs out or take up secession as a topic because communism is what we are faced with in the Democratic Party and their supporters,” one Kenneth Hammond affirms. 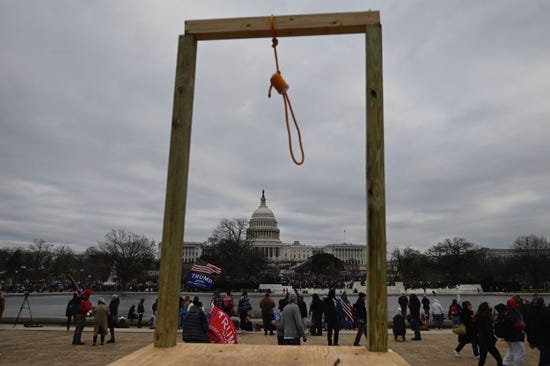 Cindy Mocha on Facebook: “We don’t need a revote…we need Biden and Harris ARRESTED and hung.”

A sampling of my social media feed:

Blaska posted House GOP leader McCarthy’s debunking of the urban legend that it was Antifa all along. That spurred one Thomas Funk to damn the messenger:

David you are like an apologist for Antifa, and it’s weird you know more about that day than the eye witnesses that were there. … you are an ObamaCrat! Stop pretending to be an American.

Before we could remind Mr. Funk that he wasn’t in the Capitol building that day, Kevin McCarthy was, Myra McQueen doubled down: “George Soros paid them to riot.”

Nancy Pelosi was in on it! Sandy Hufton wants to know: “What did Pelosi know?”

We posted the a link to Joint Chief of Staff condemnation of the attempted putsch in the U.S. Capitol and vowed to follow the Constitution. Unforced error — we linked to CNN.

“Since when do Republicans in good standing (as he claims to be, Haha) quote CNN?” Arnold Harris parried, before turning on the Pentagon.

“Just because they wear medals on their chests these are not good people. You are a fool for thinking that you can impress me, and people who think like me, with their opinions.”

We are, indeed, a fool for loving the Constitution. After trying to pawn the blame on Antifa, one Kevin Fischer gave away the game with this post:

DEAR PRESIDENT TRUMP,
PLEASE LET MITCH McCONNELL HAVE IT FROM BOTH BARRELS

Got to admit, Fischer has a way with words! and in ALL CAPS!

Trump is gonna take us down!

Dave Miller: “They want to invoke the 25th to prevent him from declassifying anything incriminating.”

Diane Berg Urie: “They’re all crapping their pants right now because he still has the power to take them down. All of them!“

Scott Paykel: “They fear if another riot breaks out, President Trump can implement Martial Law. This could ruin the inauguration plans for the China Planted President!”

Richard Pierce: “I hope he does and declare[s] martial law.”

Rt Warrender: “The response will indeed be epic!”

Dana Starre: “They should be scared. Its not over by a long shot.”

“They seem to want a war they WILL NOT win. I will add no more,” Thomas Lochowicz posted, archly.

“Treason is exposed,” Chelle Renee warns. “Insurrection is upon us.”

Tim Weidner warns: “Any Republican who turns on Trump will not be forgotten.”

Dave Hinz addressed this author by name: “You didn’t have the balls to stand up for the truth, did you f-boming traitorist coward.”

But Blaska is in good company. Carolina Gentalman proclaims, “It’s over thanks to the back stabbing RHINOS [sic] and that C*CKSUCKER PENCE.”

Now that impeachment has been voted a second time, “Congress is the enemy,” says Karin Ann.

Blaska’s Bottom Line: That’s the kind of language that led to 01-06-21, Karin Ann. Thank God for those National Guardsmen. Pray for America.

Madison WI
View all posts by David Blaska →
This entry was posted in election challenges. Bookmark the permalink.

39 Responses to They are coming for us