From the Dane County Republican Party:

Over the last weekend, protesters climbed a 30-foot billboard featuring a positive, anti-slavery message placed by the Republican Party of Dane County. The message said, “Thanks Republicans (for the) 13th Amendment, Emancipation, and Freedom.” It also featured an image of Abraham Lincoln from the Lincoln Memorial in Washington D.C.

“I was a little shocked that people would choose to deface a sign celebrating the freeing of the slaves by Republican President Abraham Lincoln with the Emancipation Proclamation and the passage of the 13th Amendment ending slavery forever in the United States,” said Republican chair Scott Grabins. 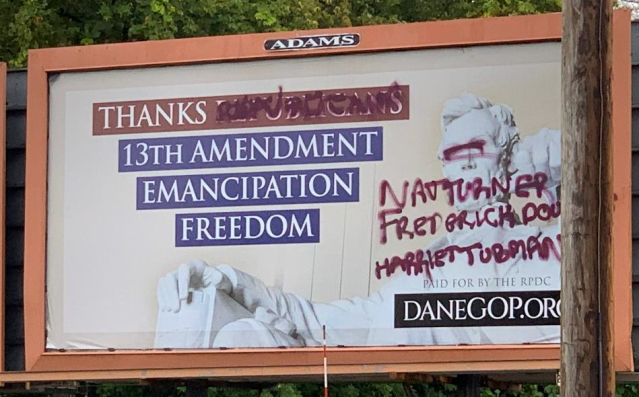 Grabins said two of the three names spray painted on the sign — Harriet Tubman and Frederick Douglass — were Republicans. Douglass was a friend of President Lincoln and Tubman believed in the right of freed slaves to bear arms like the rest of their fellow Americans. Many early gun laws were aimed at preventing black Americans from owning guns.

Grabins said the defaced billboards will be replaced.