The editor of Isthmus explains why battleground (in every sense of the word) Wisconsin will vote Donald Trump on November 3.

The video is just 21 seconds long, but in it Dylan Brogan captures a raw and emotional exchange between someone inside Papa John’s Pizza on University Avenue and a protester the evening of August 25 [2020].

Peering out through the smashed front window, the man (above) shouts, “Are you trying to get Trump re-elected? Seriously, I’ve got a family to support. I’ve got [expletive] kids to feed.”

As he walks away, what sounds like a young, female protester, responds, “These people don’t represent our movement.”

The man throws his hands up in exasperation: “Well, I’m sorry. They’re with you.”

Polling is showing it

“Wisconsin was moving towards President Donald Trump and away from Democratic presidential nominee Joe Biden even before the Kenosha riots, according to two polls released on Wednesday (08-26-2020),” Breitbart reports.

Biden is underperforming Hillary in most of the battleground states. In Wisconsin, National Review finds:

The RealClearPolitics average had Clinton up +11.5 percentage points in August 2016. Biden is up + 3.5 right now — which is to say, he is underperforming Clinton in the middle of a pandemic and economic collapse. This is the case in a number of battleground states. This average, incidentally, was taken before the Kenosha riots. 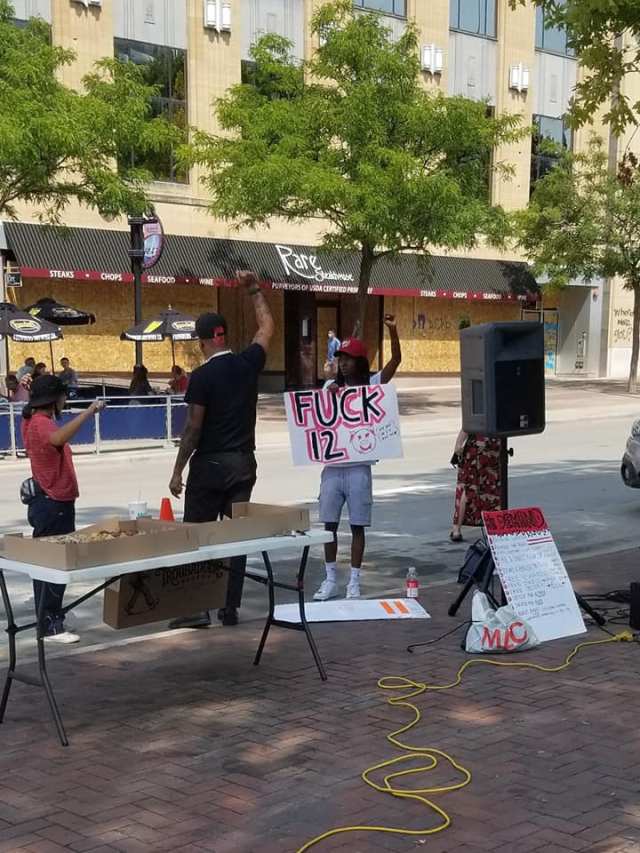 Capitol Square Madison is boarded up. “12” is an Adam 12 police reference. Photo by Earl Kielley

While Republicans are fattening up on America’s disgust during their mostly virtual convention this week, Democrats left their convention flat-footed. National Review editor Rich Lowry observes:

[Democrats] portrayed an America suffering from every possible sort of malady … but not on the disorder that has caused countless millions of dollars in property damage, killed and injured innocent people, and contributed to rising lawlessness in cities around the country. About that, they maintained a discreet silence.

“There’s no doubt it’s playing into Trump’s hands,” said Paul Soglin, who served as mayor of Madison, on and off, for more than two decades.

“The perception they have is that innocent people are the victims of the looters and the arsonists,” Soglin said. “They’re watching small business people in their communities, seeing their stores trashed. Seeing jobs lost. And people already under stress from the pandemic don’t have much patience for this politics of punishment — punishment of innocent people.”

We yield the bottom line to Dylan Brogan, our nominee for local news reporter of the year, reporting for Isthmus August 25:

There was no question what the night’s mission was for the hundreds of protesters who showed up at the top of State Street around 10:30 p.m. on Aug. 24. … Protesters in downtown Madison were hell-bent on destruction as night fell.

Why do Democrats kowtow to the racial arsonists?