We can’t (hardly) breathe no more!

Channel 3000 is reporting that one of the two victims has died following a shooting that took place on Madison’s west side Saturday night 07-25-2020.

The beleaguered Madison police responded to Schroeder Road at Chapel Hill Road around 9:30 p.m. to a report of two gunshot victims. Officers arrived on scene at approximately 9:40 pm and located the two victims and immediately rendured aid while making the scene safe for EMS to come to the scene. Officers applied a tourniquet to one of the victims prior to EMS arrival.

The ‘We Stand With Madison Police’ Facebook site writes: “Knowing how well this man was connected in the criminal gang world, I’d be shocked if there isn’t significant retaliatory violence. Madison is going to get bloodier, and the police are the only ones out there trying to stop it.“

‘We Stand With Madison Police’ reports:

“We had a huge group [show up at the hospital]. I’ve never seen such a large gathering of gangsters in one place. … and you know what? We really didn’t have any problems with them. Far fewer problems than we’ve had with the people in any single protest.

No one was yelling at us, heckling us, or threatening us. No one assaulted us or threw stuff at us. No one destroyed property. The protests are constant threats, vulgarities, and insults directed at officers they don’t even know. Last night’s group was all African-Americans, many with long criminal records — drugs, guns, violence. A lot of people we’ve chased, fought and arrested. And we had no issues with them. One protest we catch more abuse than an entire night of close interaction with the ‘who’s who’ of Madison gangsters.”

“On a side note, no one from BLM showed up to support the family at the hospital, of course, but officers were there trying to help and console the family as they could.” 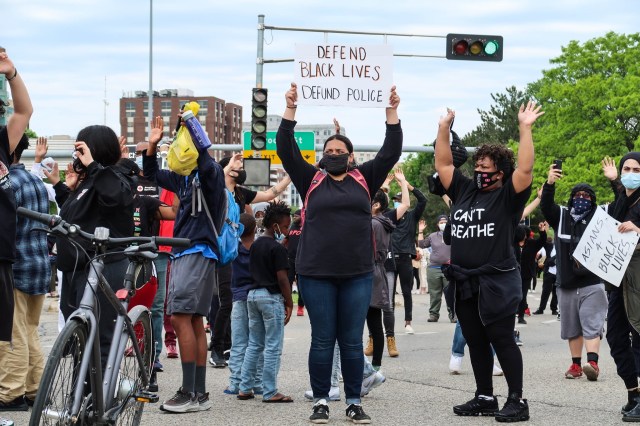 Earlier this year in Madison

Earlier Saturday: Madison’s social justice warriors descended on the home of Dane County District Attorney Ishmael Ozanne, blocking the roadway with some 30 vehicles. Ozanne is a soft-on-crime Democrat in the mold of the revolutionaries in San Francisco and Philadelphia.

Last Word goes to: We Stand With Madison Police: “Black men are being shot by each other constantly in our city, and the groups yelling “black lives matter” the loudest are bailing out the shooters and telling the victims not to cooperate with the police. Apparently some black lives matter more than others, depending on who is pulling the trigger.”

Who is pulling YOUR trigger?