Is that a bullhorn in my soup?

A friend relates this adventure in downtown Madison Wednesday 07-15-2020:

For our anniversary, me, the wife, and two friends decided to celebrate downtown at [a restaurant]. After arriving by Uber, we were greeted by “non-violent” protesters. We had told the driver to stand by, in case we decided to go elsewhere. Loud and obnoxious (in your face) were the “peaceful” protesters. We decided to cancel rather than put up with what could get worse as more folks joined the “festivities,” had we dined there. [Restaurant] staff said 37 cancellations of 54 reservations. So much for venturing downtown anytime soon.

We also learned that the Mayor and MPD have agreed to allow these antics at State and Carrol Streets every evening.  The mayor can take total blame for the demise of businesses in the isthmus area.

We ended up dining at Ruth’s Chris in Middleton. 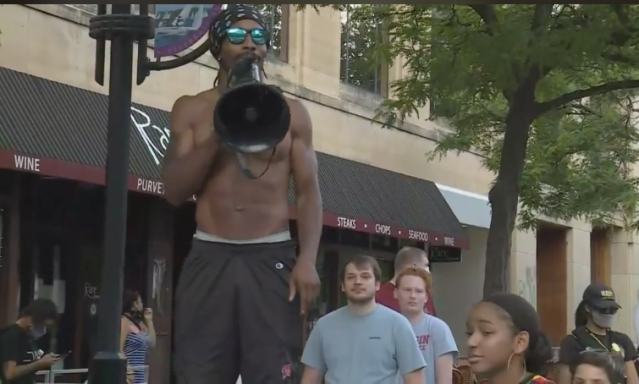 Who is ‘tone deaf’ alder Verveer?

Where is Madison city government? They had planned $500,000 to help businesses recover from the BLM riots and looting last month. Not that half a million is going to go all that far. The entirety of State Street (some 80 businesses) is boarded up.

But wait a doggone minute! Where is the EQUITY? Madison officials can’t do anything without pouring identity politics through a flour sifter.

Alders are now considering throwing half the stipend at “a Downtown Equity Program” that would help support new entrepreneurs of color to locate Downtown … [for] a more equitable Downtown recovery.”

Downtown Ald. Mike Verveer (Progressive Dane) said after hearing from other Common Council and Madison residents, he realized the original reimbursement program for locally owned downtown businesses to recover  “came across appropriately as tone deaf.” So The Capital Times reports.

Cities must be safe to thrive

Researchers, struggling to understand why crime fell so much, have offered many theories, including mass incarcerations, having more police on the streets, and communities themselves reclaiming their public spaces.

There is a risk, said Joel Kotkin, whose 2006 book, The City,  traced the evolution of urban areas …

… that the backlash against policing will go too far and leave cities less safe. The constant pressure to reform, to increasingly extreme positions on law enforcement, is going to have a really bad effect. “Safety is a prerequisite for urban growth,” he said. “I can’t see how cities can thrive if they’re unsafe.”

21 Responses to An evening downtown, canceled