The NY Times makes me sick

Wisconsin’s Spring election made the cover story of The New York Times Magazine this Sunday (05-10-2020).

Would it surprise you that author Emily Bazelon trashes Republicans for insisting on holding the election as scheduled on April 7 as a nefarious means to depress turnout?

This excerpt gives the game away: “Conservatives have long focused on increased turnout as a threat … In the days of Jim Crow …” 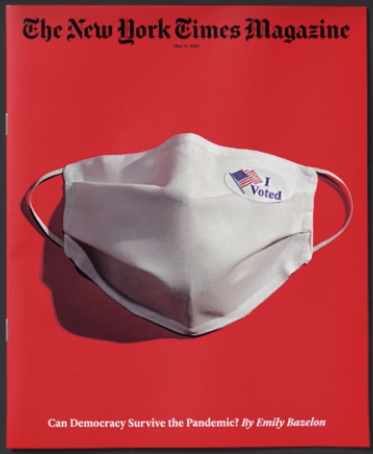 “In the weeks after the election, Milwaukee health officials traced at least 40 cases of the virus to in-person voting,” Bazelon reports. But no deaths. Likely no more coronavirus cases to shopping at Menard’s or Home Depot.

The NY Times Magazine piece is a brief for mail-in voting. The denizens of Blaska Stately Manor mailed their ballots. It worked for us. But the process  required some familiarity with creating an electronic image of a valid I.D. (the possession of which, according to liberals, is beyond the ability of minority-race citizens), then uploading same via the internet.  Even the Times had to admit “some voters were struggling to figure out how to upload their identification from their phones to the state’s MyVote website.”

Then there’s the issue of voter fraud. John Fund at National Review examines the issue:

Democrats and their amen corner in the news media are in the courts trying to prevent Wisconsin state election officials from culling dead and moved-away voters.

No NY Times piece — whether on the edit page or the Style section — would be complete without delegitimizing Republicans. The Wisconsin legislature

… is firmly in the hands of Republicans, who drew a gerrymandered map a decade ago that has allowed them to retain a majority in the State Assembly even though they won only 47% of the vote in 2012 and less than 45% in 2018.

We’ve said it before and will repeat again:

⇒ In fact, Republicans held a 59-39 advantage in the 2010 Assembly in districts drawn by that judge. In the first election after the supposedly gerrymandered map, that advantage grew to 60-39 (replacing the one independent.).

So, of course, the NY Times writes, “Trump benefited from decreased turnout in 2016 … where participation by black and Democratic voters declined from the historic levels that lifted Barack Obama” — thanks to those Jim Crow Voter I.D. laws, of course.