Bloomberg was stopped and frisked in Dem’s debate

His campaign strategy
is a non-disclosure agreement

What did we say Wednesday (02-19-2020) before that night’s Democrat(ic) presidential debate? That all of Michael Bloomberg’s considerable money can’t buy him love.

Mike Bloomberg is finished. The other five Democrats on stage last night in Las Vegas used him as target practice. Bloomberg was undone by his party’s obeisance to identity politics, economic redistribution, and victim envy.

We’ve become fans of the New York Post because it is almost British in its cheeky irreverence. “Oh, was it glorious,” writes the Post’s John Podhoretz. “The sheer raging hostility spraying across the stage …

It’s not that the gloves were off. No, my friends, everybody was wearing steel-tipped boots and going right for the crotch. Those weren’t snowflakes. They were nunchucks.” 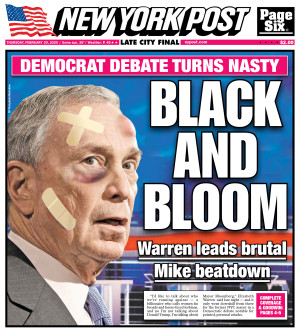 •   Klobuchar wheeling on Buttigieg and demanding to know if he was trying to say she was dumb. “Are you mocking me here, Pete?” [Blaska: Do I amuse you?]

•   Joe Biden saying he’s the only one on stage who has met all kinds of Mexican presidents — whose names he clearly couldn’t remember.

•   Bloomberg saying he was too rich to release his returns because he can’t do Turbo Tax like all of you losers.

•   Sanders fuming that Bloomberg would dare mention he has a summer house.

Two-point nine on a scale of ten!

On Bloomberg, the NY Times panel was merciless. A sampling:

Ross Douthat (2/10) — He introduced himself with terrible, fumbling, unpleasant responses to the most predictable lines of attack (race, sexism, tax returns). Some OK moments later against Sanders but the first hour was a real-world demolition of his virtual candidacy.

Peter Wehner (1/10) — His performance was a catastrophe — stiff, arrogant, tone deaf and intensely unlikeable.  His answer on [non-disclosure agreements] was among the worst in the history of presidential debates.

Gil Duran (1/10) — Bloomberg’s not a leading candidate — he just plays one in TV ads. When he wasn’t taking blows, he was invisible. His answers on racism and sexism were awful. Money can’t buy charisma — or humility. Historically bad debate performance.

“My wife likes to talk during sex. Last night she called from Chicago.”

Someone should tell Bloomberg that real Democrats (his current political party) hate billionaires like him. All those consent agreements were because of sexist jokes? Well, were they at least Rodney Dangerfield funny? Why not parry Elizabeth Warren (that scold!) with a Henny Youngman, “Take my wife, please.”

“Somebody tell Mike Bloomberg that Roseanne Barr was kicked off her own show for telling a joke some people didn’t like,” advises Ann of Althouse, blogger at law.

Haven’t seen any mention that the other Democrats scored Bernie Sanders for the vicious behavior of many of his supporters. True believers, like we have here in Madison WI who will spray “white supremacist” at anyone who argues for school discipline. (Ahem.)

Blaska’s Bottom Line: There is no clear contender for the Democratic middle. Bernie Sanders remains the front-runner and Bloomberg got one thing right: “I don’t think there’s any chance of the senator beating Donald Trump.”

Madison WI
View all posts by David Blaska →
This entry was posted in Election 2020, Uncategorized and tagged Michael Bloomberg. Bookmark the permalink.