No policy gimmick is too outlandish — as long as it’s free!

It’s an old adage: be lucky in your enemies. Is anyone luckier than Donald Trump — an insecure, mean-spirited bully — to draw the Hildabeast as his opponent in 2016? Trump’s dumb luck seems likely to hold, given the derangement gripping the opposition, enamored of Jeremy Corbyn-style neo-Marxism.

To defeat an unpopular president, the Democratic Party picked itself up— and placed itself outside the mainstream of American politics.

In almost every national public presentation this year, especially in their presidential debates, they branded themselves not as what they had to be — a sophisticated party with a working-class heart — but what they couldn’t be—extreme left-wing progressives. It was a historic misjudgment. 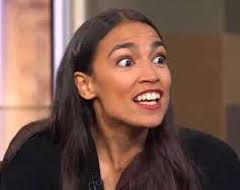 They would ban fossil fuels and fracking. At least one candidate said America’s religious institutions should lose their tax-exempt status if they oppose same-sex marriage. They are extreme on abortion — no limits, ever — and in their support of identity politics, which sees not a country but a thousand warring tribes endlessly rewarded for being at each other’s throats.

John Delaney, where have you gone?

Peggy forgot about Andrew Yang’s $1,000/month free money for everyone! Probably too late for her deadline, Mayor Pete on Thursday endorsed reparations for illegal immigrants — in addition to black folk. And he’s the supposed moderate! All Democrats insist —  against all evidence — that the American economy is one long, despondent bread line. More Peggy (and more cowbell!):

Rep. Alexandria Ocasio-Cortez and “The Squad” [are] enthusiastically held up by the Democrats’ friends and operatives in the press as the future of the party. If they are, the future is grim, with their Leninist insistence that you’ll do it their way or be flattened.

Peggy’s Bottom Line: It makes the 2020 race not “Trump vs. the Democrat,” a race he can lose, but “Trump vs. Lefty Madness,” which he can win.

Madison WI
View all posts by David Blaska →
This entry was posted in Election 2020, Uncategorized. Bookmark the permalink.

11 Responses to Democrats: Still crazy after these three years