Some off-the-cuff impressions from this morning’s (10-31-19) House of Representatives impeachment debate, written in real time.

Two visual impressions. One of the Democrats spoke in front of a placard of Donald Trump with the words “Do Me a Favor” superimposed over the President’s lips.

Republican minority whip Steve Scalise countered with his own poster: the onion domes of the Kremlin with the legend: “37 Days of Soviet-style impeachment proceedings.” (Video here.) 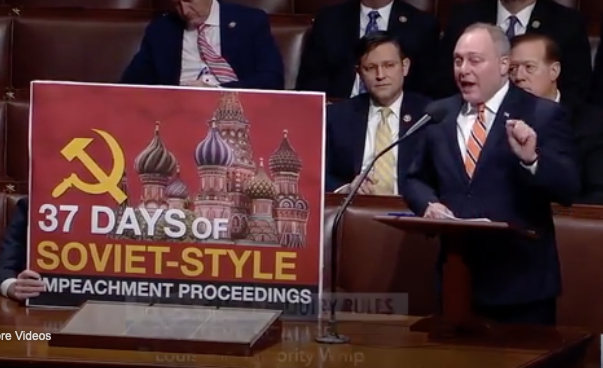 That about sums it up. Democrats are doing a dry run of the actual impeachment; they chided Republicans for talking about process, process, process. But the subject of today’s vote was process — what rules would government an impeachment. Come to it, the Constitution of the U.S. is nothing but process. No content, no policy, no appropriation. The Constitution is a rule book at the foundational level.

Republican minority leader Kevin McCarthy said the only purpose of impeachment was to undo the results of the last election and to influence the next election, now barely one year hence.

He quoted Alexander Hamilton in the Federalist Papers who warned “there is always a great danger that impeachment will be driven by partisan animosity.” Republicans objected that: