Indian summer is heating up here in Madison WI

Wouldn’t it be wonderful if Mainstream Madison showed up!

But whom are we kidding? Progressive Dane, Freedom Inc., YG&B, Community Response Team, assorted socialists and anarchists will flood the zone at these major governmental meetings this week in Madison.
Jason and Jennifer Madison will stay home, then bitch
about why the city is going off the rails.

Tell ya’ what: If you can’t go, send a message:

Tell the school board to wise up!

This, that and the other thing

Now THIS is Indian Summer. Fall color hereabouts at full peak. Unlettered field hands at the Experimental Work Farm rototilled the feed patch except for second crop of beets. (We’ll see how they do.) Will spread macerated leaves on over everything. Lawn aerated to feed oxygen to the micro organisms and make happy the roots of grass. Wood pile is covered. Storm windows are in place. Port wine on order.

The white lab coats at Blaska Policy Werkes are replacing the piston rings on the Eisenhower-era mainframe known as “Ol Sparky” after its string of Badger football mis-predictions.

No one is talking Heisman about J. Taylor any more, sad to say. Given that the ground game was bottled up, could QB Jack Coan have thrown more than 17 times? His one TD pass to A.J. Taylor was a thing of beauty, dropped between two defenders close enough to share saliva. That made it 10-7 Buckeyes and we had a game, for awhile. The Squire is old enough to remember when they laughed at Tommy Thompson for predicting Rose Bowls. Now Badger fans expect national championship seedings. 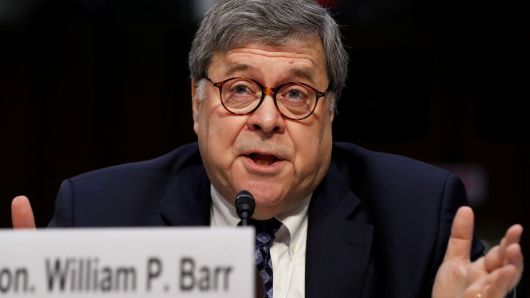 Who is this man?

The first page of the New York Times Sunday Review section asks “Who is Bill Barr?” The Squire wrote, in black ink right on the page itself: “Attorney general of the United States of America.” Imagine his ire to see the question repeated on Page 4 of that same section, forcing Blaska Policy Werkes to repeat the answer. “The eff-florescing A.G.!”

Bill Barr’s problem, according to a “staff writer for the New York Times Magazine,” is that the A.G. is conservative in politics and Roman Catholic in religious affiliation. A Papist! Not a Nancy Pelosi cafeteria Catholic, either.

The piece accuses A.G. Barr of “subverting the independence of the nation’s top law enforcement agency.”

Golly gee, Beaver, my copy of the U.S. Constitution doesn’t even mention “Department of Justice” but references only “inferior officers … as provided by law.” (Article 2, Section 2) Which is to say the attorney general, as head of the Department of Justice, is NOT a co-equal — and therefore and independent branch of government but is inferior to the chief executive.

⇒ Put it this way: ya’ think JFK appointed brother Bobby because he wanted an independent attorney general?

The Times appears dumbfounded that Barr had written that the President “alone is the executive branch.” That’s about right. The buck, one of those chief executives famously said, stops there.

The front section of the Times has a feature story on Mitt Romney, “suddenly relevant” again because he disagrees with Donald Trump. The white lab coats at the Werkes remain big fans of Mitt. No President is above criticism and Mitt’s critique — as opposed to the nattering Nadlers — is more on point. We mention the Romney profile mainly because it reports that the man is “well barbered.”

One other cavil. The New York Times claims that the U.S. has a “Deep State” because of civil service. The poster boy for the spoils system has long been U.S. Grant, who was betrayed by many of his grifting cabinet appointees. Two presidents later, James Garfield would inaugurate civil service reform. (Unmentioned in the article.) But cabinet appointees were never civil service. And corruption among cabinet members — always and necessarily political — continued through Harding’s Teapot Dome scandal of the 1920s and Nixon’s A.G. John Mitchell for perjury.

It’s the down in the trenches, the lifers who can throw a monkey wrench into the works. People like Peter Strzok and Lisa Page …

Off on a tangent

The WI State Journal makes a fair point. “Testing body cameras in Madison would cost less and provide more openness and accountability than the $200,000 city leaders have budgeted for an independent police monitor.”

But it makes that point at the tag end of a lengthy editorial promoting its pet cause for police body cameras that is included in no one’s budget or amendment in this budget cycle. COURAGE, PEOPLE!

Need we say more about news media bias? Here is how CNN headlines the U.S. take-out of ISIS major-domo Abu Bakr al-Baghdadi: “Key Democrats left in the dark about US raid.”