AKA: The Emerald City, where cops are the bad guys
and lawbreakers are so misunderstood

Madison’s police chief told Ms. McKenna that Madison needs more cops on the streets but probably won’t get them due to the city’s indebtedness and (he hinted) antipathy. Tell you what Madison needs even more than additional blue uniforms, Chief:

More vocal support from the city’s elected and opinion leaders.

Madison needs its mayor to stand before the TV cameras and put her arm around the chief’s shoulder and announce, “I support Madison police.”

⇒ Ain’t going to happen. Not when the mayor appoints Brenda Konkel to the Safety Review Board.

We need the alders to put an end to the endless second-guessing and vote down the proposed police monitor and civilian review board composed of ex-convicts, homeless, and other presumed police “victims.”

We need Madison Teachers Inc. to push back against professional race-baiters like Bettina Love, who denounce Madison schools as being rife with “systemic racism.”

“You look around this room, and there’s a huge amount of white folks teaching black kids,” she accused teachers to their face Monday morning.

⇒ MTI is too invested in identity politics to stand up for race-blind learning.

We need Zach Brandon and the Madison Chamber of Commerce to speak out against the grievance culture that indicts police for lawlessness. Or opinion leaders like Neil (Go With the Flow) Heinan to say “Quit bullyragging the police.”

We need voters to hold school board members responsible for middle school kids who trash Lakeview library and taunt “We don’t have to listen to the police.”

We need county and city government to quit funding public sector service agencies like Freedom Inc. that shut down school board meetings and bully dissenters.

We need taxpayers to question how the quasi-public Common Wealth Development could hire someone who thinks like Megan Diaz-Ricks to be its director of economic development. This is what she wrote this week on Muldrow’s Facebook page:

Students should be agents of their own learning trajectory and asking them to fit into a box and sit down, shut up, and learn is not what works. Maybe for you … but I like to think that children who reject the hypocrisy of mainstream education as an oppressive institution are highly intelligent and maybe we should be listening to them, not arresting them.

⇒ But crying “Racism” is what got her elected! 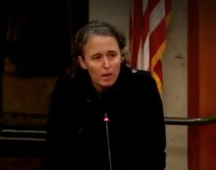 Chief Koval has repeatedly, while using city resources such as his blog or while in uniform, engaged in grassroots campaigning in effort to sway you, the Common Council and the Mayor, on decisions that are before you.  This behavior appears to violate city ordinance 3.35(5)(b)3 which prohibits using city resources, including the Chief’s blog, uniform, transportation, for grassroots campaigning.

On August 7th 2019, Chief Koval revisited Vicki McKenna’s AM radio show in what appeared to be an effort to lobby against the possibility of having mental health professionals be involved in responding to mental health emergency calls. … Chief Koval’s behavior on McKenna’s show was willfully dishonest and irrational.

Royko-Maurer even blames Koval for personally thanking Blaska and Paula Fitzsimmons (by name ) for supporting police in our “Support Our Madison Police” yard sign campaign of three summers ago!

Chief Koval has degrees in law and public relations and he is one of the most privileged and powerful people in the city.  He knows what he’s doing.  Please hold him accountable.

For extra credit read “Politicians in a political bubble.”