The Left coast is even leftier

The provost marshal of the Policy Werkes made a surprise visit to our branch campus here on America’s Left Coast. The nutty ideas germinating here are bound to make its way to the Berkeley of the Midwest. Blaska filed this report:

San Francisco is considering an outright ban on vaping. Odd, that market-leader JUUL is based here. Odd that cigarettes could still be purchased while its safer alternative could not. Yes, vaping introduces addictive nicotine but none of the tars and other carcinogens that makes tobacco a health threat.

Two Bay Area legislators are doing their best to advance socialism. They would throw an extra tax on the largest corporations depending on how much they pay their chief execs vis-a-vis their workers — a tax rate up to 14.84% on companies paying their CEOs more than 300 times their workers. On average, the CEO of the top U.S. companies make nearly $14 million a year — 361 times more than the typical worker. The teachers union signed on as supporters.

More than 1,500 doctors and hospital staff at the University of California-San Francisco have signed petitions to end the partnership with the Catholic Church. Abortions, sterilization, and transgender surgery, don’t you know.

Big fuss over a massive mural at San Francisco’s George Washington High School. “The Life of Washington” painted in 1936 under WPA auspices depicts (among many other scenes) Washington stepping over the body of a native American and slaves lugging bales of cotton. A school board committee recommends painting the whole thing over. It is the work of Victor Arnautoff, is considering a major artist and disciple of Diego Rivera. And a political leftist. His work can also be seen at Coit Tower,

Authorities at San Francisco International Airport are struggling to deal with rising numbers of homeless people arriving at the International Terminal, many of them seeking shelter in the middle of the night after riding BART trains south from the city.

It’s the latest expression of the region’s increasingly visible homelessness crisis … which this week declared a state of emergency over surging crime, rampant fare evasion and “quality of life” issues.

The San Francisco Board of Supervisors last week unanimously rejected a 63-unit apartment complex, including 15 below-market-rate units, because it would cast an evening shadow on a two-acre park. A shadow lasting an hour and a half. On the longest day of the year. Over 18% of the park’s surface. 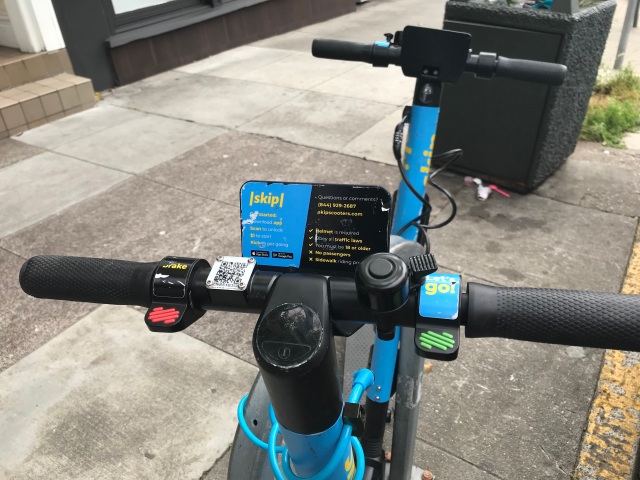 Says not to use on sidewalks. Yeah, right

One sees the occasional Tesla in Madison but here in the City by the Bay the vehicle is bidding to overtake the Beemer. And you can rent electric scooters and mopeds curbside here, via a smartphone app, of course.

The city is indignant that President Trump wants to dump illegal immigrants on this sanctuary city. Speaking of sanctuaries, Julian Assange loses his sanctuary at the Ecuadoran embassy in London because he wouldn’t clean up the bathroom or mind his kitty cat.

Like the evil “Chucky” marionette says in those humorous Spectrum commercials, “House meeting!”

22 Responses to The Left coast is even leftier